The libp2p docs have a new look! Help docs.libp2p.io continue to improve by providing feedback and contributing.

QUIC is a new transport protocol that provides an always-encrypted, stream-multiplexed connection built on top of UDP. It started as an experiment by Google between Google services and Chrome in 2014, and was later standardized by the IETF in RFC 9000, RFC 9001, and RFC 9002.

QUIC was designed with the following goals in mind:

In addition to defining the QUIC transport, the IETF also standardized a new version of HTTP that runs on top of QUIC: HTTP/3 ( RFC 9114). HTTP/3 combines the advantages of the existing transfer protocols HTTP/2 and HTTP over QUIC in one standard for faster and more stable data transmission.

The following diagram illustrates the OSI model for HTTP/2 and HTTP/3 [1]: 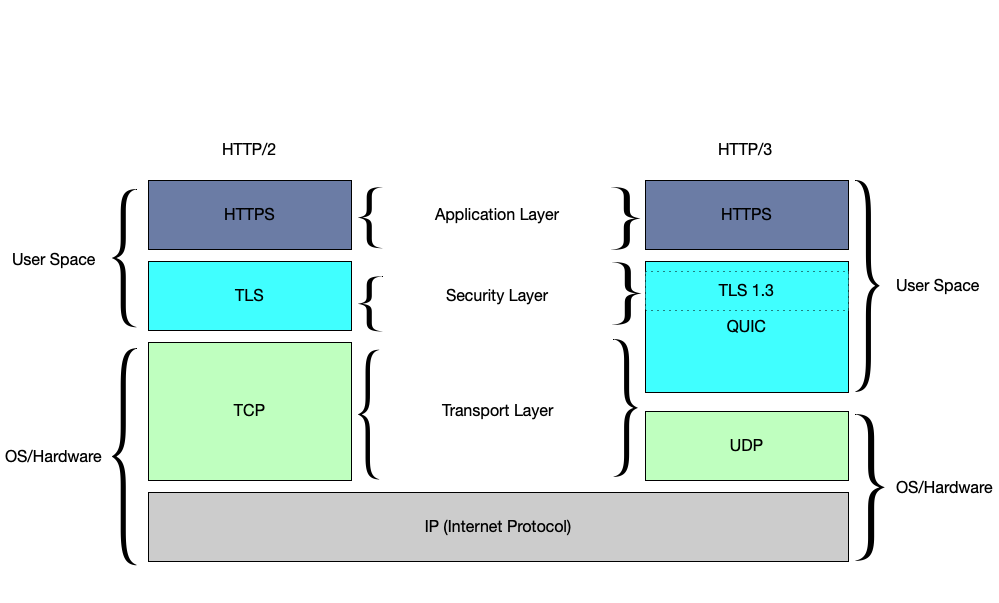 In contrast, HTTP/3 runs over QUIC, where QUIC is similar to TCP+TLS+HTTP/2 and runs over UDP. Building on UDP allows HTTP/3 to bypass the challenges found in TCP and use all the advantages of HTTP/2 and HTTP over QUIC.

How does QUIC work? #

QUIC combines the functionality of these layers. Instead of TCP, it builds on UDP. When a UDP datagram is lost, it is not automatically retransmitted by the kernel. QUIC therefore takes responsibility for loss detection and repair itself. By using encryption, QUIC avoids ossified middleboxes. The TLS 1.3 handshake is performed in the first flight, removing the cost of verifying the client’s address and saving an RTT. QUIC also exposes multiple streams (and not just a single byte stream), so no stream multiplexer is needed at the application layer. Part of the application layer is also built directly into QUIC.

In addition, a client can make use of QUIC’s 0 RTT feature for subsequent connections when it has already communicated with a certain server. The client can then send (encrypted) application data even before the QUIC handshake has finished.

To authenticate each others’ peer IDs, peers encode their peer ID into a self-signed certificate, which they sign using their host’s private key. This is the same way peer IDs are authenticated in the libp2p TLS handshake.

💡
To be clear, there is no additional security handshake and stream muxer needed as QUIC provides all of this by default. This also means that establishing a libp2p connection between two nodes using QUIC only takes a single RTT.

Edit this page on GitHub
← Listening and Dialing
WebTransport →
Top